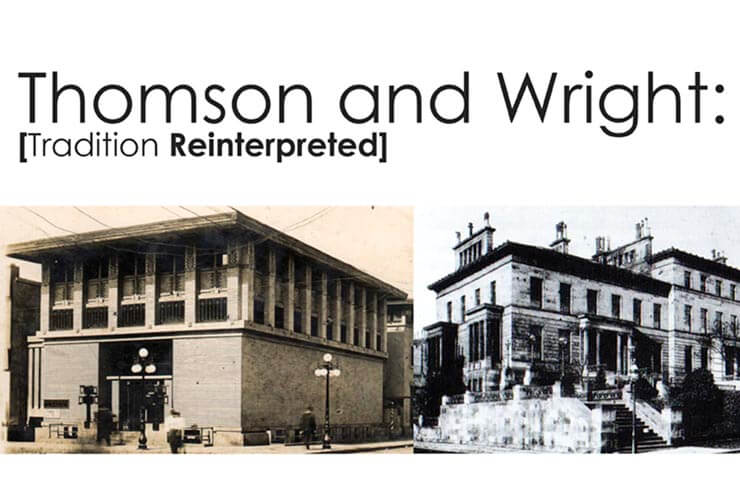 The winner of the 2016 RAMSA Travel Fellowship was announced this evening at an event in RAMSA's New York office.

The winner, Gerald Bauer, a Master's candidate at the University of Notre Dame School of Architecture, will be awarded $10,000 to fund travel to Milwaukee, Chicago, and Glasgow, Scotland, where he will study the work of Alexander "Greek" Thomson and Frank Lloyd Wright. "Despite being born at opposite ends of the 19th century," Mr. Bauer wrote in his submission Thomson and Wright: Tradition Reinterpreted, "and with no evidence of communication in their lifetimes, Thomson's Greek Revivalism and Wright's early Prairie Style bear striking resemblances ... as two strains of an analogous logic which sought an appropriate expression of modernity rooted in historical precedent." The object of his pursuit, Mr. Bauer continued, will be "to validate the coexistence of modernism and traditionalism in contemporary design."

The jurors were persuaded by how closely Mr. Bauer's proposal hewed to the program's theme of "the perpetuation of tradition through invention." "Mr. Bauer's plan to trace parallel careers that ended in two different places intrigued us," said the jury. "The subject he proposes to study, combined with evidence in his design portfolio that he's already absorbed influences from both Thomson and Wright, made it easy for us to imagine how this original research might help him continue the through-line of tradition through invention in his own career as an architect."


The jury was also impressed by the quality of this year's 20 submissions, which came from applicants at 12 schools. Among the remainder of the field, the jury singled out the following for honorable mention:

- Mark Leskovec (Cornell University): Not a Drop to Drink.

- Yazma Rajbhandary (Yale University): Rebuilding a Past: A City’s Attitude Towards Disaster.


About the RAMSA Travel Fellowship

Robert A.M. Stern Architects, LLP, is a 320-person firm of architects, interior designers, and supporting staff. Over its forty-seven-year history, the firm has established an international reputation as a leading design firm with wide experience in residential, commercial, and institutional work. As the firm’s practice has diversified, its geographical scope has widened to include projects in Europe, Asia, South America, and throughout the United States. The firm maintains an attention to detail and commitment to design quality which has earned international recognition, numerous awards and citations for design excellence, including National Honor Awards of the American Institute of Architects, and a lengthening list of repeat clients. The firm's founder and senior partner, Bob Stern, practicing architect, teacher, and writer, is Dean of the Yale School of Architecture and a Fellow of the American Institute of Architects.