The Museum of the American Revolution Tops Out 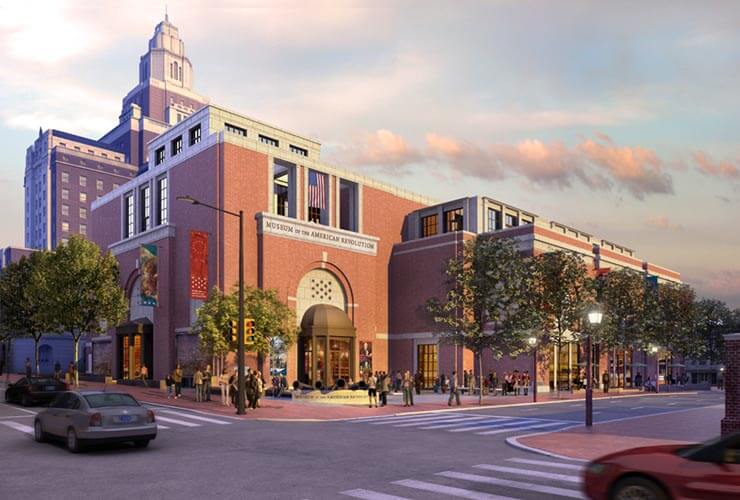 Today the Museum of the American Revolution celebrated the topping out of its future home anchoring the eastern end of Philadelphia's Independence National Historical Park. The Museum will introduce visitors to the American Revolution with its extraordinary collection of historical artifacts and contemporary interpretations demonstrating the continued worldwide importance of the Revolution.

“This is a great day for the Museum of the American Revolution. We have reached this milestone thanks to our many supporters from every state in the Union who are rallying to the cause of a Museum that will explore the full, remarkable story of our nation’s founding,” said Michael C. Quinn, Museum President and CEO. “We are now looking forward to our next major milestone, opening day, in the spring of 2017.”

Set amidst buildings of national and architectural significance—facing the First Bank of the United States (Samuel Blodgett, 1795), near William Strickland's Merchant's Exchange (1834) and the U.S. Custom House (Ritter & Shay, 1934)—the Museum will carry forward the restrained Classicism that heralded the birth of the Republic. The Museum will address the corner of Chestnut and Third Streets with a broad plaza and an inviting, bronze-domed entrance with a stone tympanum above. A museum shop and café that opens to the sidewalk will enliven the Third Street facade; above, the wall that conceals the galleries will be articulated with recessed brick arches, accented with stone at the spring points and keystones, which will house stone apsidal niches. On Chestnut Street, a bronze bay window will look into the lobby and be flanked by two bas-relief panels depicting John Trumbull's painting Declaration of Independence.

Our design organizes the Museum around a skylit central interior court. The ground floor will accommodate a multi-use theater and a changing exhibition gallery. Within the court a grand elliptical stair will take visitors up to 18,000 square feet of galleries and a theater dedicated to the exhibition of George Washington's marquee tent, one of the Museum's most dramatic holdings. A light monitor rendered in Alabama limestone will emphasize the Museum's verticality and flood third floor event space intended for conferences, symposia, and social events with light; two broad terraces overlooking the First Bank will command views to Independence Hall and the modern-day Philadelphia skyline. The Museum will provide state-of-the-art storage and conservation spaces, following best practices for sustainable museum design to target LEED Silver certification.

RAMSA Partners Robert A.M. Stern, Alexander Lamis, and Kevin Smith lead the design. Intech Construction in Philadelphia is the construction manager. The Museum is set to open in early 2017.