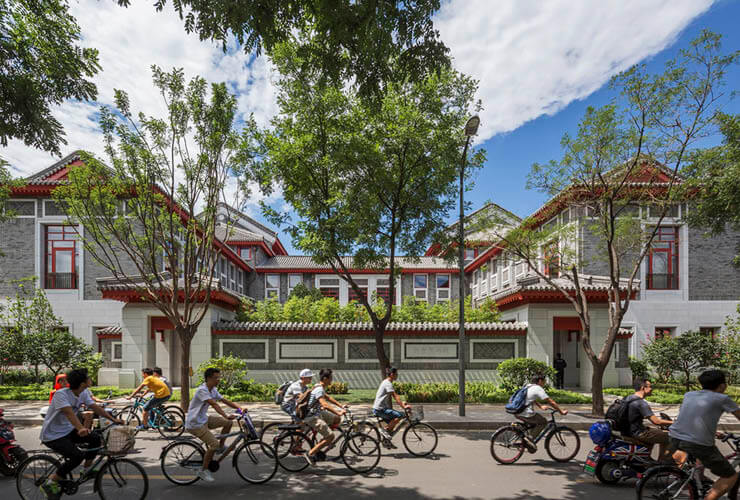 Today the new home of Schwarzman College at Tsinghua University in Beijing, China, was dedicated at a celebratory convocation for students, their families, and distinguished guests. The new building is the residential and academic home for the Schwarzman Scholars program, established to prepare the next generation of global leaders for the challenges of the future and China's expanding role in the world. The new College is intended to foster community among scholars from around the world and resident and visiting faculty.

"We are thrilled to have been entrusted with the design of Schwarzman College, a building that will support what is surely a landmark in the evolution of international scholarship and social exchange, housing in one unified setting the academic programs, social life, and residential quarters for the Schwarzman Scholars and the very many distinguished visitors who will come from all corners of the globe to exchange ideas," said Robert A.M. Stern. "Much like the curriculum it houses, the College building is designed to bring together Eastern and Western principles with the intention of contributing to a synthesis between tradition and modernity in contemporary Chinese architecture."

In remarks delivered at the formal convocation this morning, Stephen A. Schwarzman, who conceived the program, inspired by the Rhodes Scholarship, and announced it with a $100 million personal gift in 2013, told the assembled, "A win-win relationship of mutual respect and understanding between China and the West is vital to continued global peace and prosperity. I am extremely grateful to our donors; their generous gifts have helped us build a world-class program to ensure that we can support a new class of talented scholars each year in perpetuity. These scholars will play an important role in fostering friendship, cooperation, and collaboration in our increasingly interconnected and constantly shrinking world." The full text of the program’s press statement is here; the web site also features a 3D tour of the new building here .

Recalling traditional houses of China, the building is organized around two courtyards—one interior to the building and one facing the street. Beyond a low garden wall with open entrance pavilions, the entrance courtyard welcomes both scholars and visitors to a double-height living-room-like Forum, flanked by a library and a dining hall. The Forum will serve as the vital, focal social space for informal conversations, lectures, and large gatherings. Classrooms and a conference center surround a sunken interior garden court beneath which is a 230-seat auditorium. Above are four floors of single bedrooms for scholars organized in groups of eight that share a common lounge—an arrangement intended to foster close relationships among subsets of the 200 international scholars who will be enrolled at any given time. Faculty apartments are located in the wings above the library and dining hall. Above a stone watertable, the building is clad in the gray brick characteristic of Beijing, accented with panels of abstracted traditional stone and wood details. A traditional tile roof of varied heights moderates the building's scale and accentuates its corners.