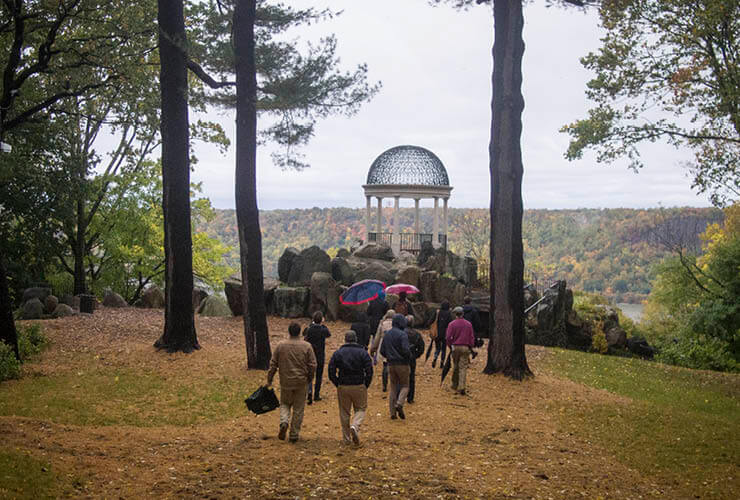 The first stop on the day-long excursion was Untermyer Gardens in Yonkers. Formerly part of the Greystone estate, the gardens were commissioned by attorney Samuel J. Untermyer in 1899 and designed by William Welles Bosworth and Charles W. Leavitt. Completed in 1916, it consists of multiple distinct gardens and garden elements, including a walled Greco-Persian-inspired pleasure garden, an Italianate Allee, and a Beaux-Arts temple on a cliff. Despite the rain, the group enjoyed the views overlooking the Hudson River.

The group then toured Lyndhurst, the Gothic-style summer home of New York City Mayor William Paulding, Jr., designed by Alexander Jackson Davis in 1838 and renovated 1865. Later owned by the Gould family, the estate is a well-preserved example of Davis’s residential work.

Finally, the RAMSA team visited Kykuit, the John D. Rockefeller estate. Designed by William Welles Bosworth in conjunction with Delano & Aldrich and completed in 1913, Kykuit is the largest and most opulent home of the many on the 3,500-acre Rockefeller estate, a preeminent example of estate architecture of its era, consisting of a Beaux-Arts style 40-room main house situated in a 250-acre garden. The estate contains the extensive modern art collections of the younger Rockefellers.

The excursion was a part of a series of fall and summer trips organized by the firm to support research through travel to historical architectural sites and important cities. Previous destinations have included Princeton, Philadelphia and its Main Line suburbs, the Upper Hudson Valley, the Berkshires, the DuPont Estates in Delaware, the United States Military Academy in West Point, Long Island's North Shore, and East Hampton, New York.