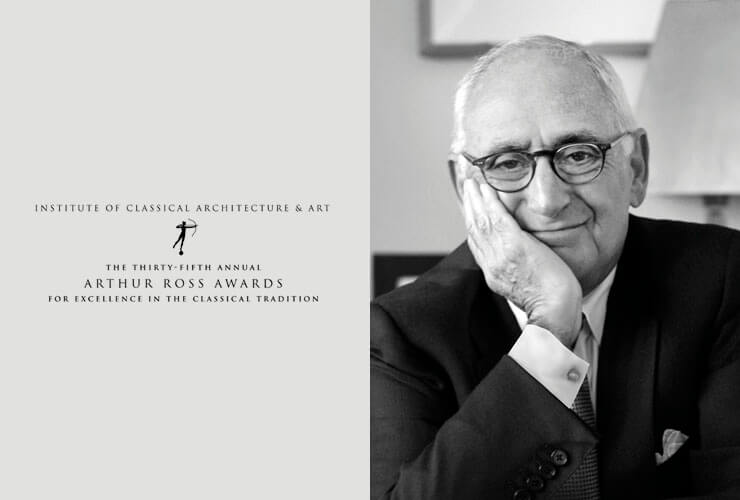 The Institute of Classical Architecture & Art announced that it will present Robert A.M. Stern with the 2016 Arthur Ross Award for Education at a Celebration on May 2.

As Robert A.M. Stern completes his long and transformative tenure at the Yale School of Architecture, his role in promoting an expansive view of architecture cannot be overstated. Mr. Stern's decades of teaching and his embrace of plurality in architectural education have hugely advanced the causes of classical and traditional architecture and urbanism. His many books and publications, including his renowned five-volume New York series, Paradise Planned: The Garden Suburb and the Modern City, and most recently Pedagogy and Place: 100 Years of Architecture Education at Yale, have set new standards in architectural scholarship. A career-long practitioner-as-educator, Mr. Stern has had an immeasurable impact on generations of students worldwide. No one has done more to enlarge the possibilities of architecture in the 21st century.

Of this year's Awards, ICAA President, Peter Lyden, said: "Now in its 35th year, the Arthur Ross Awards play a fundamental role in recognizing the professionals and organizations that have made a lasting impact on the practice and appreciation of the classical tradition. The ICAA is deeply honored to celebrate the 2016 Award winners and their profound influence on the future of classicism here in the United States and around the world."

Established in 1982 by Arthur Ross and Henry Hope Reed, the Awards recognize the achievements and contributions of architects, painters, sculptors, artisans, interior designers, landscape designers, educators, publishers, patrons, and others dedicated to preserving and advancing the classical tradition. Mr. Stern won the Arthur Ross Award for Design in Architecture in 1991.

The 2016 Arthur Ross Awards celebration will be held at The University Club on May 2nd and will commence with cocktails at 7 PM. The Awards dinner and ceremony will follow at 8 PM. To purchase tickets for the event, please contact Kathleen Maloney Lo at (212) 730-9646 x 106. Or register online click here. For more information about the Institute of Classical Architecture & Art, please click here.