By the late 1970s, the theater block of 42nd Street, once the symbolic heart of the Big Apple's entertainment district, had become rotten to the core. In 1987, we developed guidelines for the adaptive reuse of five theaters on the block. But plans for the revitalization of the theaters, tied to the development of four supersized office buildings at the Times Square end of the block traditionally known as the Crossroads of the World, were stalled by lawsuits and by the deep economic recession of the early 1990s.

In 1992, in order to jump start the street's revitalization, the City and State agencies working together as the 42nd Street Development Corporation Inc., invited our team of architects and designers to provide an interim plan for the block, which in its abandoned condition had become an embarrassingly visible symbol of New York's decline. Our plan included proposed uses for the lower floors of currently vacated or underutilized sites and as a critical step toward getting things moving, the development of a forward looking image based on, but not tied to, 42nd Street's past. Our plan was governed by six principles: Layering, Unplanning, Contradiction and Surprise, Pedestrian Experience, Visual Anchors, and Aesthetics as Attractions. We proposed that the street return to its traditional role as an entertainment center, with new signs and lights overlaying what was already in place, adding new dimensions to what was an almost archeological record of New York's architectural and entertainment history. Most importantly, our plan insisted that the entire block be treated as a single entity, with strong architecture and uses anchoring its Seventh and Eighth Avenue corners, thereby overcoming a weakness that had plagued it through the century when Eighth Avenue was first given over to burlesque and prostitution and later to the blockbuster scale of a bus station.

Timing is everything in architecture as in most things. For a decade or more the 42nd Street project had been pilloried by the press and ignored by the entertainment industry. But, just as work on our deeply contextual plan, accompanied by strong and believable imagery showing how the reborn street might look, was nearing completion, the Walt Disney Company began to look for a theater to house a new corporate venture: musical plays. Once Disney agreed to take over the architecturally distinguished but disastrously decayed New Amsterdam Theater, the largest theater on the block, other entertainment companies took notice and began to vie for a spot on the born again street. In response to interest in the Eighth Avenue end of the block, we prepared a set of guidelines for a retail, entertainment, and hotel complex; these were used to sponsor a three way competition that led to the selection of a bold design, demonstrating that new large scale construction need not be dull. We also designed a temporary storefront exhibition as a way of introducing the public and developers to 42nd Street's rich history and current opportunities.

In 1996, the reborn street began to take shape when portions of the plan and the detailed use and signage guidelines were implemented on an interim basis, with the partial restoration of the historic Rialto Building and the construction of the temporary Disney store. Overnight, it seemed, bleakness gave way to a blaze of signs and lights, mixing traditional and new technologies with historic and new buildings. In recent years we have remained intimately involved with the development of architectural and signage guidelines for the tower sites at the corners of Seventh and Eighth Avenues, and we continue to participate regularly in design review meetings as consultants to the 42nd Street Development Project. Our scope has broadened to include the Port Authority Bus Terminal and the New York Times site on Eighth Avenue between 40th and 41st Streets. 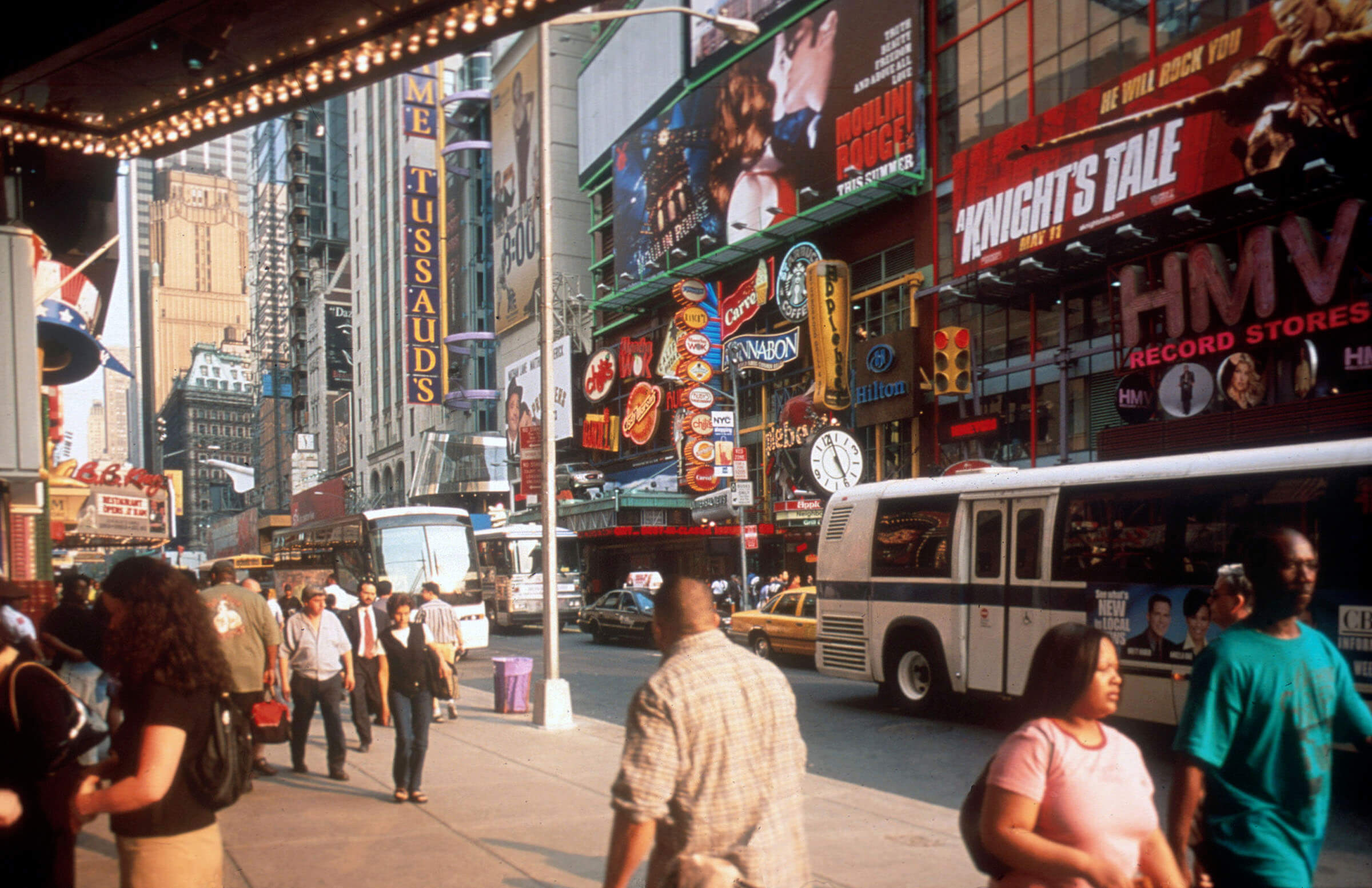 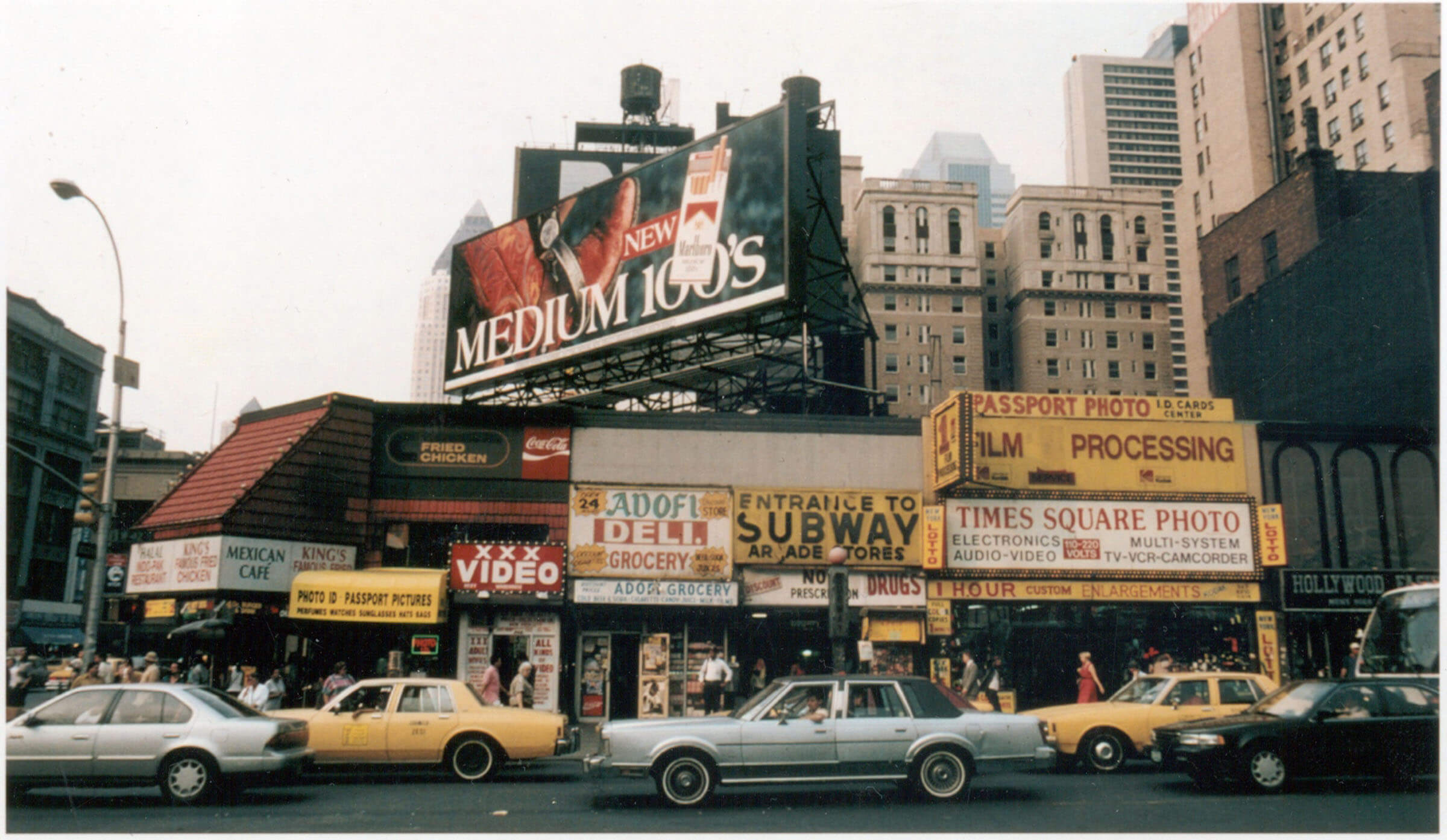 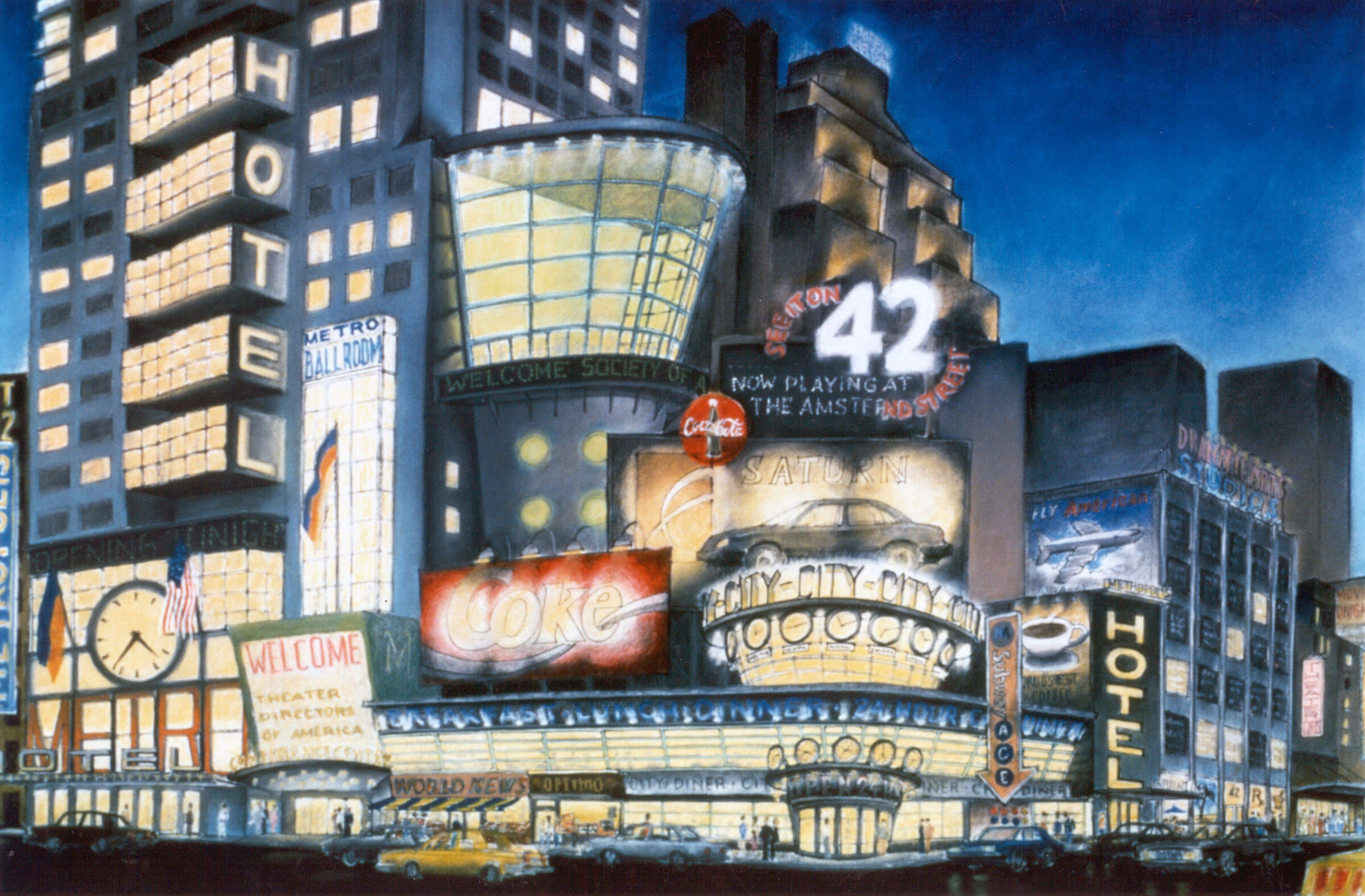 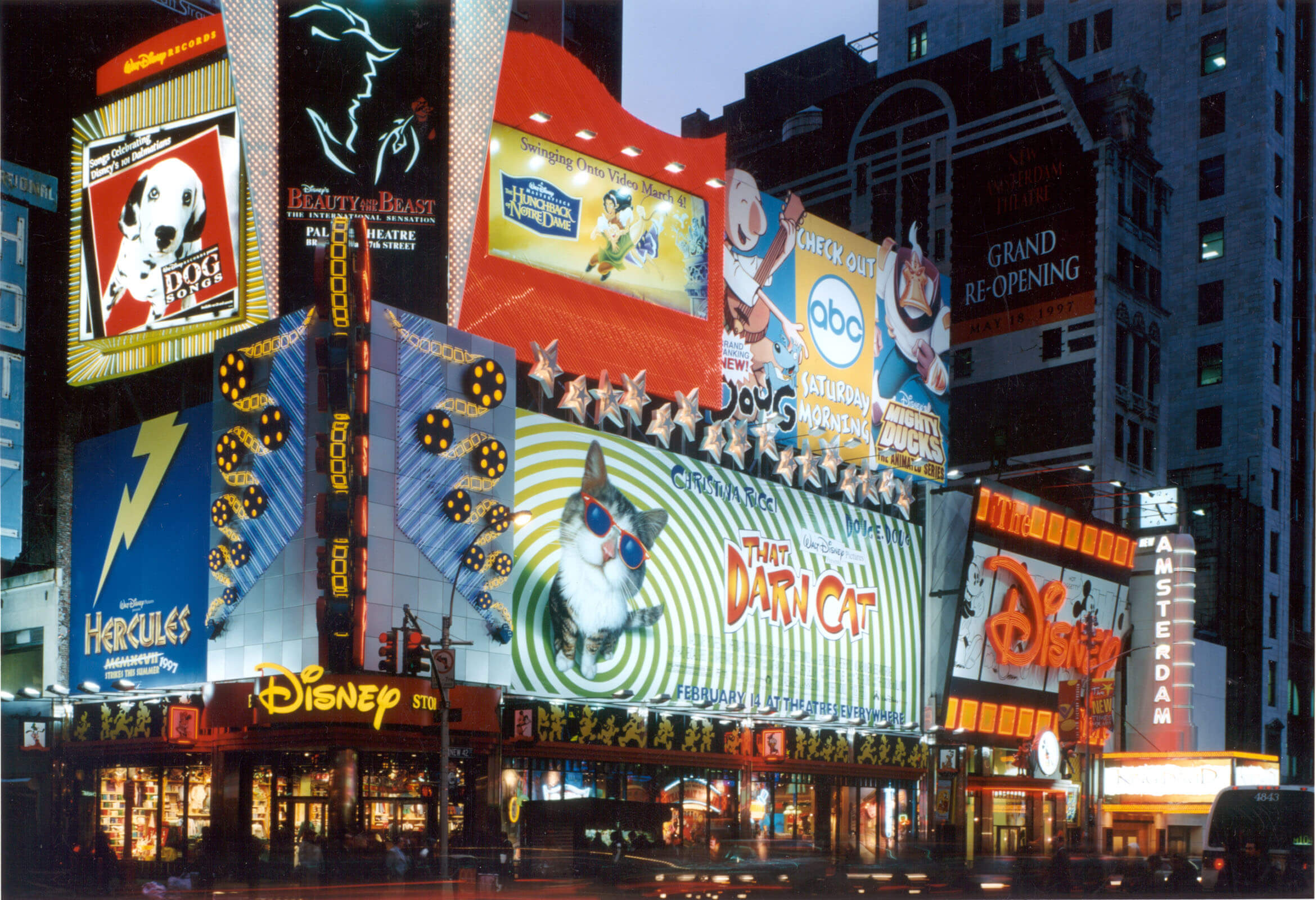 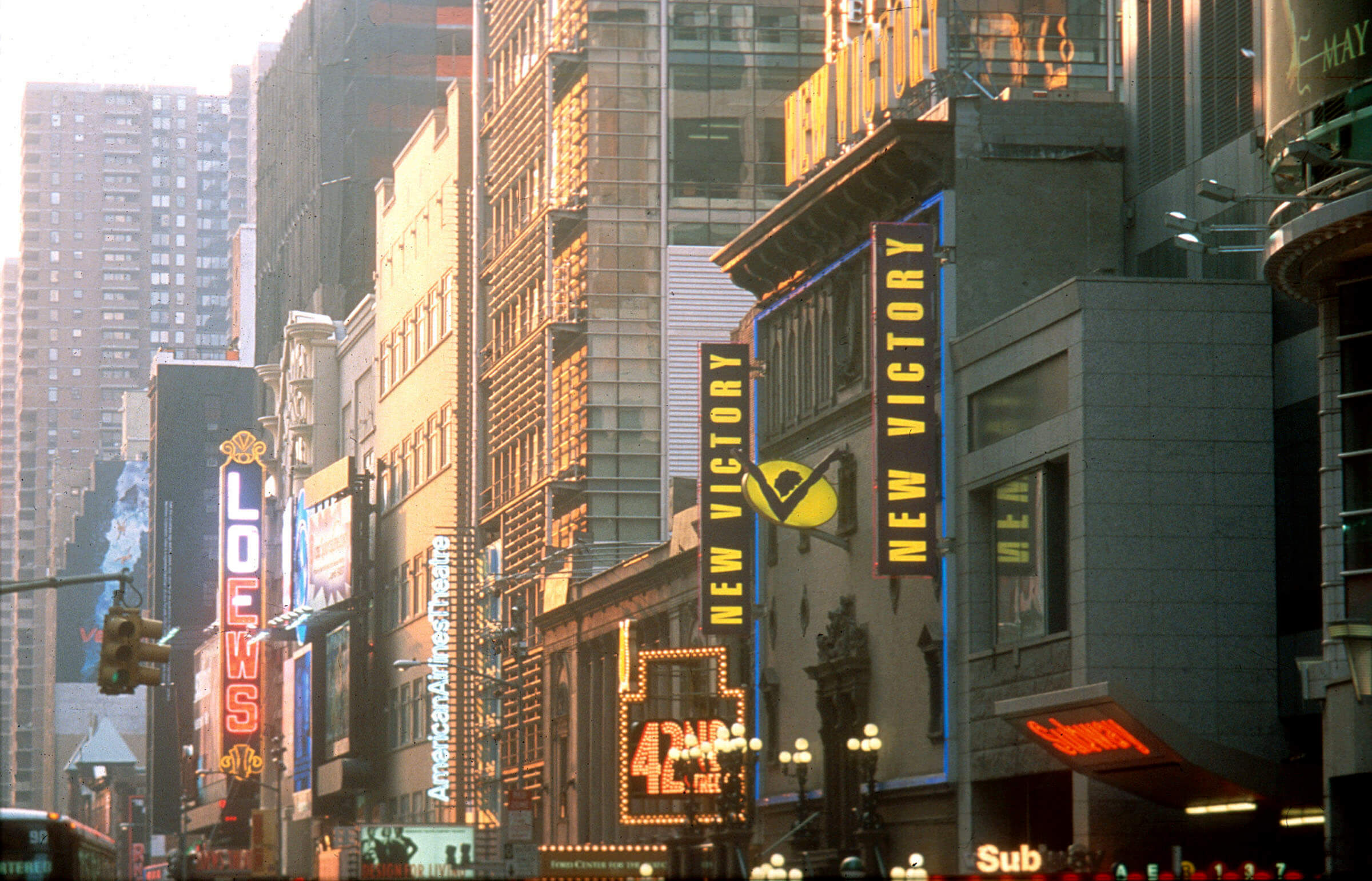