We approached the design of GrandMarc at Westberry Place first and foremost as an exercise in sensitive urban design. As the first major project in the rebirth of West Berry Street, the GrandMarc sets the standard for future development. Great care was taken in tailoring an ambitious program to accommodate a significant number of housing units, amenities, retail, and parking on a limited site. The entire block has been planned to create three distinct masses of differing character with careful consideration to the place each occupies in the urban fabric.

The Bowie Street building faces the campus of Texas Christian University and takes its design and massing cues from TCU's buildings. With a classical pediment announcing the central entrance, warm ochre brick, double hung windows, and a hipped clay tile roof, the building has been designed to feel like a natural extension of the campus and a transition to the more urban character of West Berry Street.

The building on Berry Street takes the particular dialect of the Mediterranean Revival that flourished in Fort Worth after the Second World War, in places like Camp Bowie Boulevard, Magnolia Street, and West Berry Street (the last demolished a decade ago). Characterized by red brick walls painted a warm white and hipped and gabled tile roofs, the Berry Street building displays a balanced asymmetrical massing, with set-back fifth and sixth floors, culminating in a prominent gable and an iconic tower. In addition to being the linchpin of the building’s composition, the tower serves as a central marker for the entire West Berry Urban Village. The facade is further adorned with balconies, deep eaves, and corbelled brick cornices.

Residents enter the Berry Street building from Waits Avenue through a grand covered archway that leads to a generous courtyard. A covered arcade wraps the courtyard off of which are three corner entrances to the building cores. At ground level, retail wraps the building from the outparcel on Greene Avenue, across the full front of Berry Street and around to the building’s entrance on Waits Avenue. A canopy of wood brackets supporting barrel tiles shelters shoppers and introduces a pedestrian scale to the building. Front-lit painted signs are hung above the storefronts and from the rafters of the canopy. A limited area of the display windows are designated for decal signage. In addition, the corners of the Bowie Street building house smaller retail locations. Sidewalks along Berry Street are 15 feet deep to accommodate cafe dining.

The parking garage were planned to present its short facades to Greene and Waits Avenues. These facades were broken down further by the articulation of the facades into corner blocks with a screen that supports climbing plant material. Refuse and service for both residences and retail are within the buildings, with access from Greene Avenue. 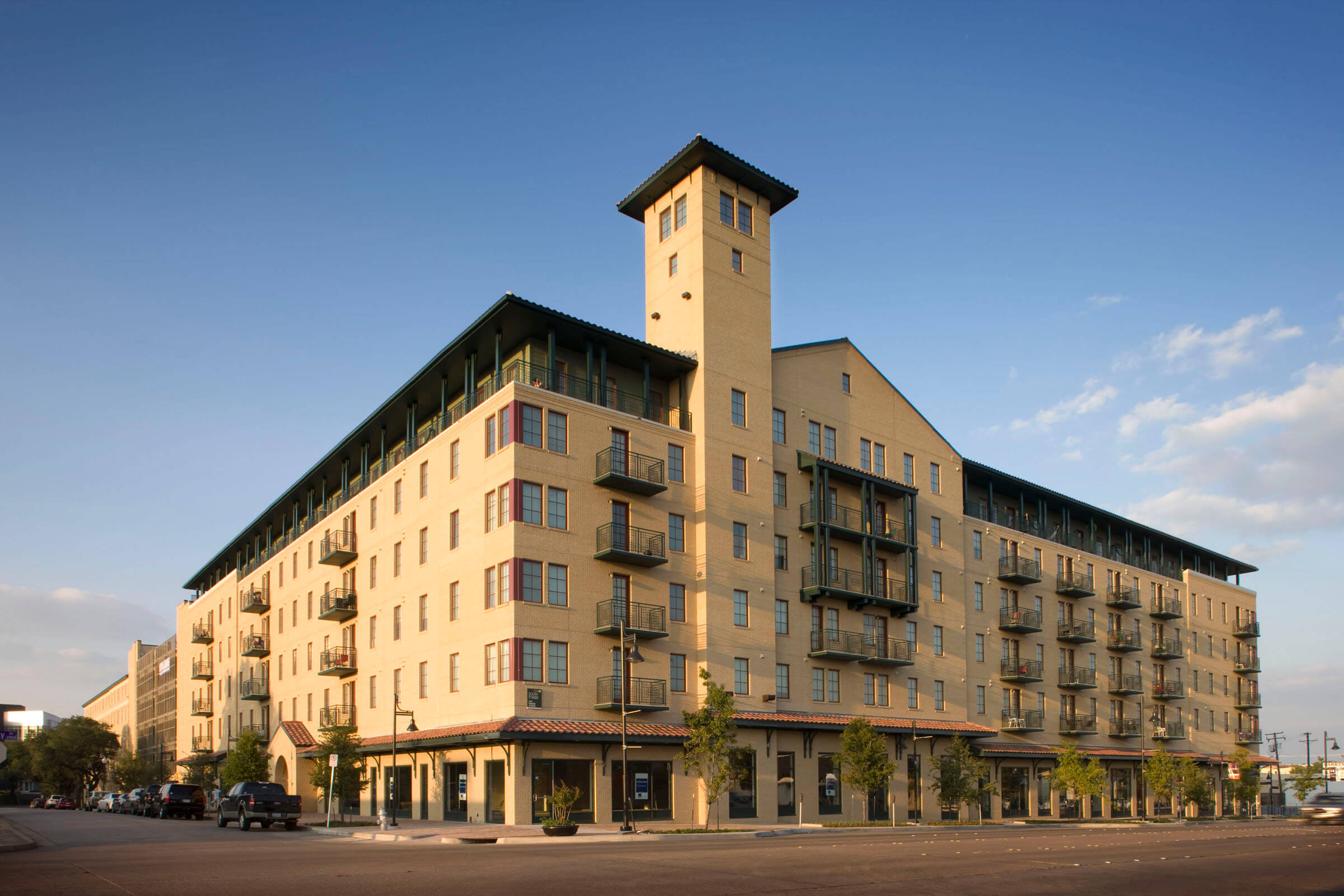