The 160,000-square-foot new home for Rice University’s Jesse H. Jones Graduate School of Business is located on a prominent central site near the western end of campus facing the James A. Baker III Institute of Public Policy (Hammond, Beeby, Babka Architects, 1997) to the south and Alice Pratt Brown Hall (Taller de Arquitectura, 1991) to the west. Our team’s scope of work included master planning of the entire quadrangle bounded by these buildings and as yet undeveloped sites, and design of the new Jones School building as well as the two level, 486-car parking garage which lies below the new building.

The new building’s symmetrical front facade mirrors the mass, scale, and general proportions of the Baker Institute which it faces across Jamail Plaza, but expresses the program which lies within with a second-floor, double-height arcade that screens the reading room of the School’s library. The balance of the building’s considerable mass is placed in a slipped-bar arrangement of east/ west-oriented classroom and office wings placed punctuated where they overlap by an open-air “sallyport” which facilitates pedestrian movement through the building.

The new building houses facilities for the Jones School’s graduate and executive education programs. On the ground floor common amenities such as a 208-seat dining room and student, faculty and executive lounges surround a courtyard. Also on the ground floor and adjacent to the main entrance are the School’s Office of Placement and a 500-seat auditorium. At the second and third floors the School’s library, classrooms, and faculty offices are placed in a configuration that fosters collegial interaction without compromising faculty privacy and the distinctions between the MBA and Executive programs. In addition to 60-seat, tiered, case study rooms the new building features an instructional trading room and “dinner theaters,” tiered classrooms with six-person tables designed to permit students both to listen to a single presenter and to work in small groups.

In keeping with the University’s stylistic consistency, the Jones School’s exterior is clad in Rice-standard St. Joe’s brick with wide, flat struck joints, limestone and matching cast stone trim, a Missouri granite base, and red, barrel tile roofs, with details and massing that explicitly recall the University’s Lovett Hall (Cram, Goodhue & Ferguson, 1912) as well as other previous buildings that constitute the touchstones for the campus’ physical image. In keeping with the University’s long tradition of architectural iconography, Jones Hall incorporates plaques and cameos depicting famous and infamous business practitioners and theoreticians through the ages, designed by Kent Bloomer, who also carved the bull and bear which flank and guard the main entrance. 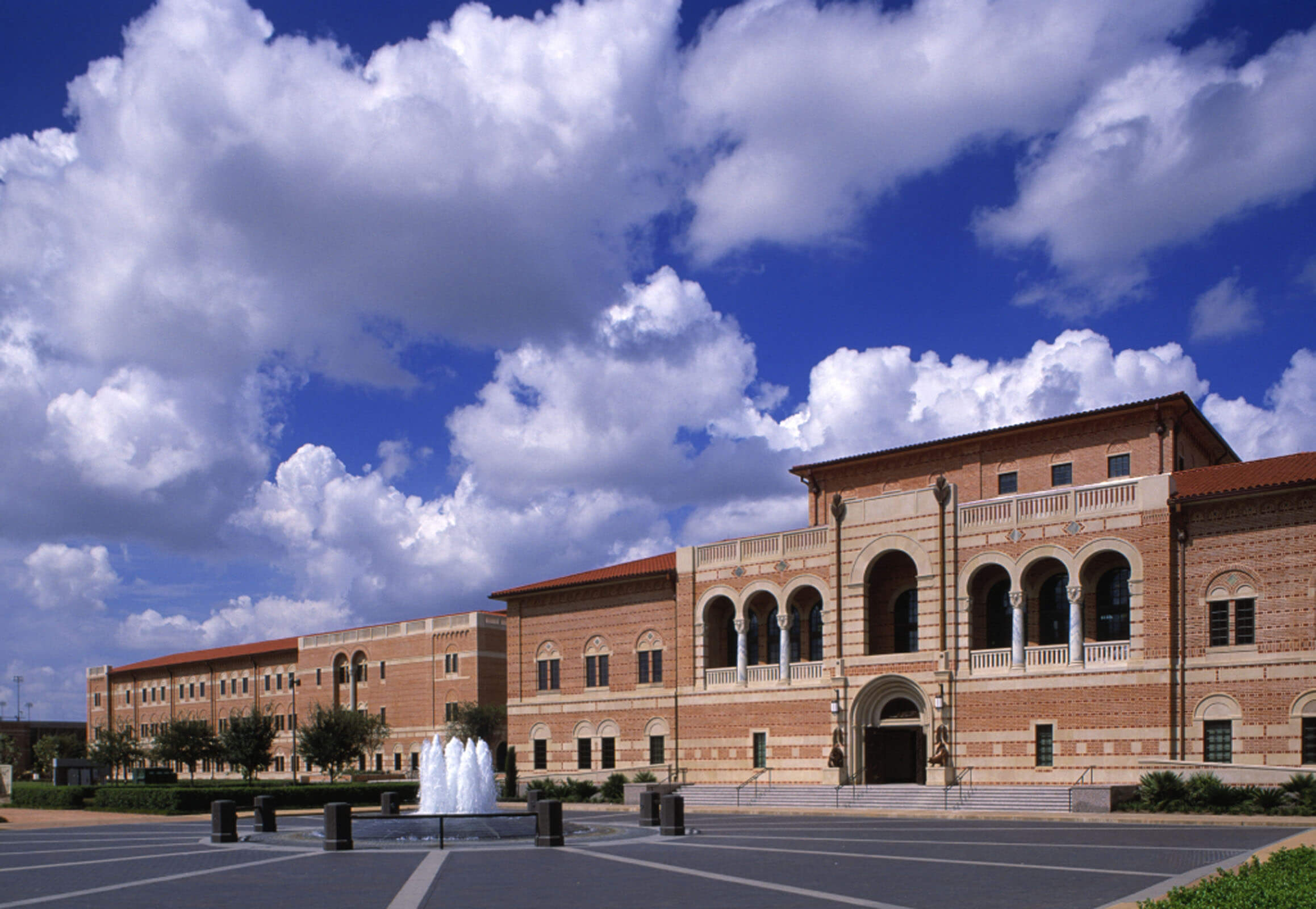 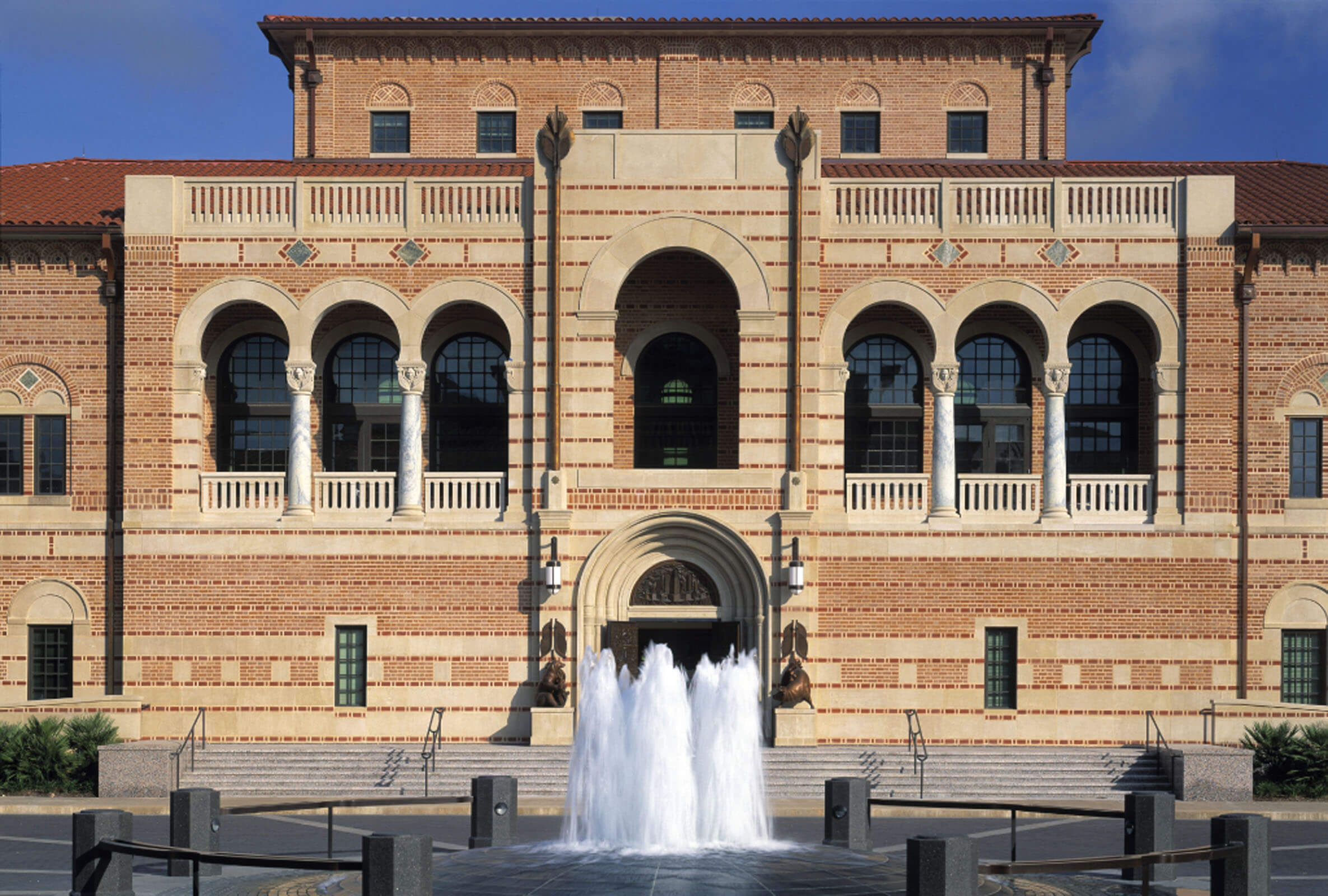 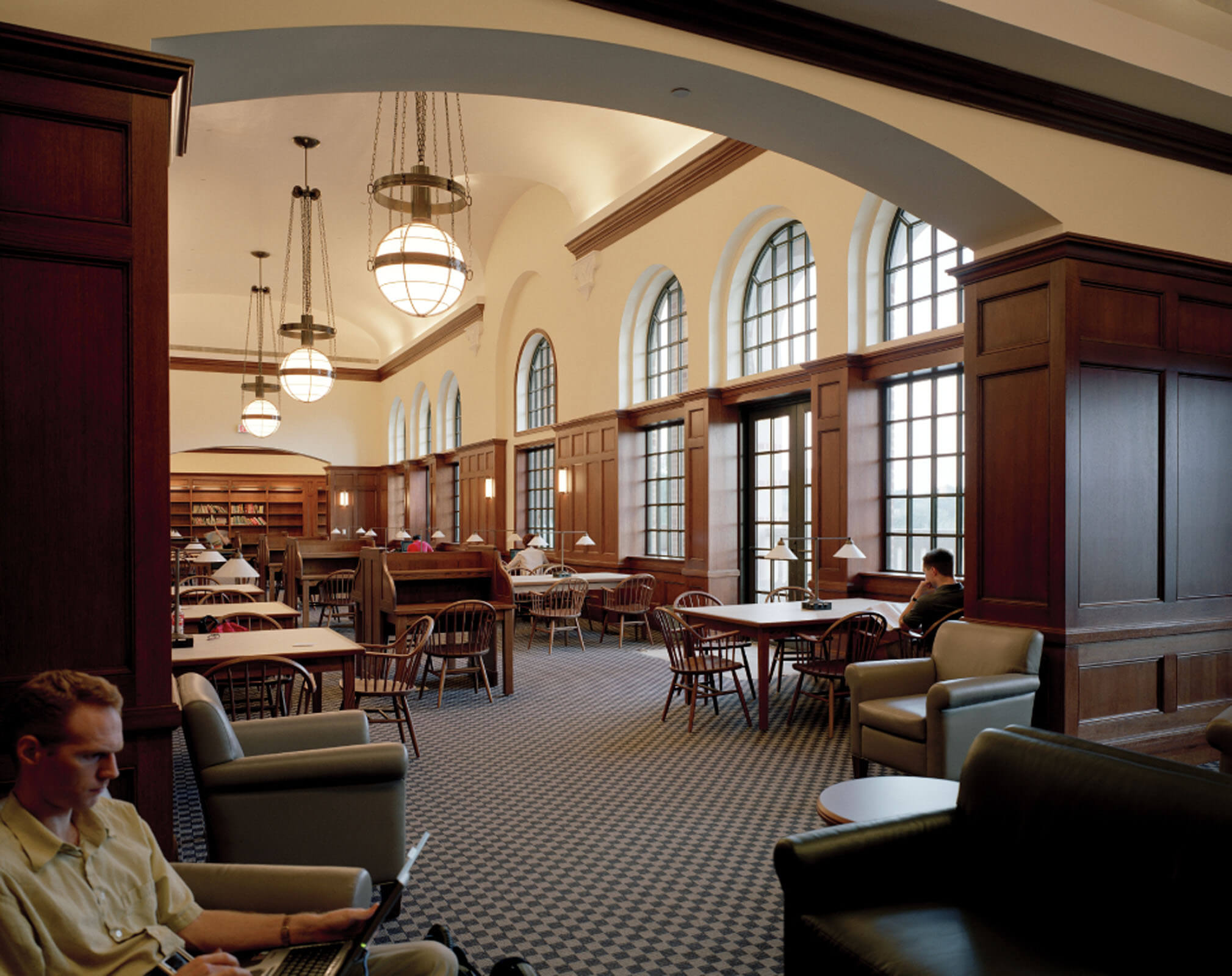 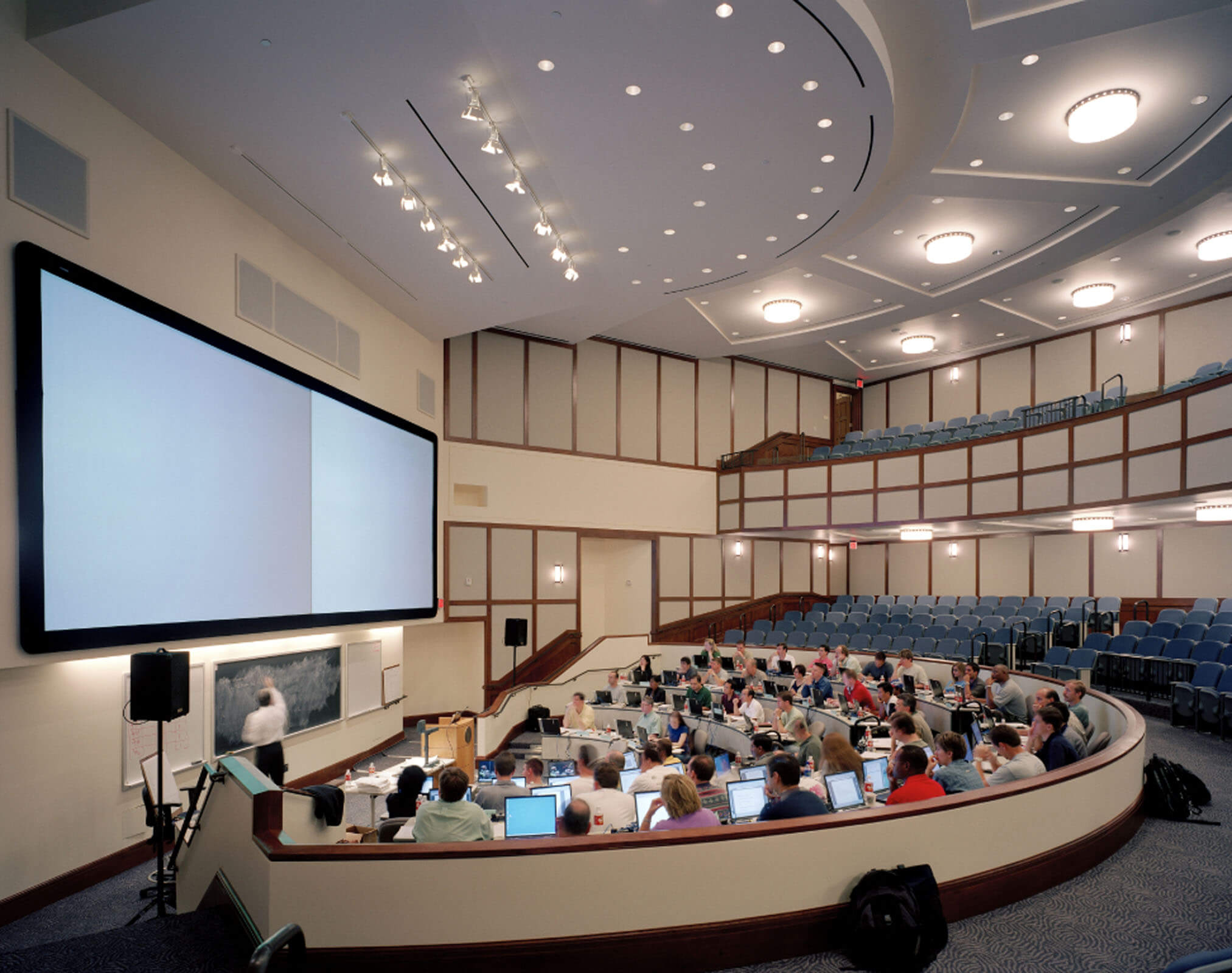 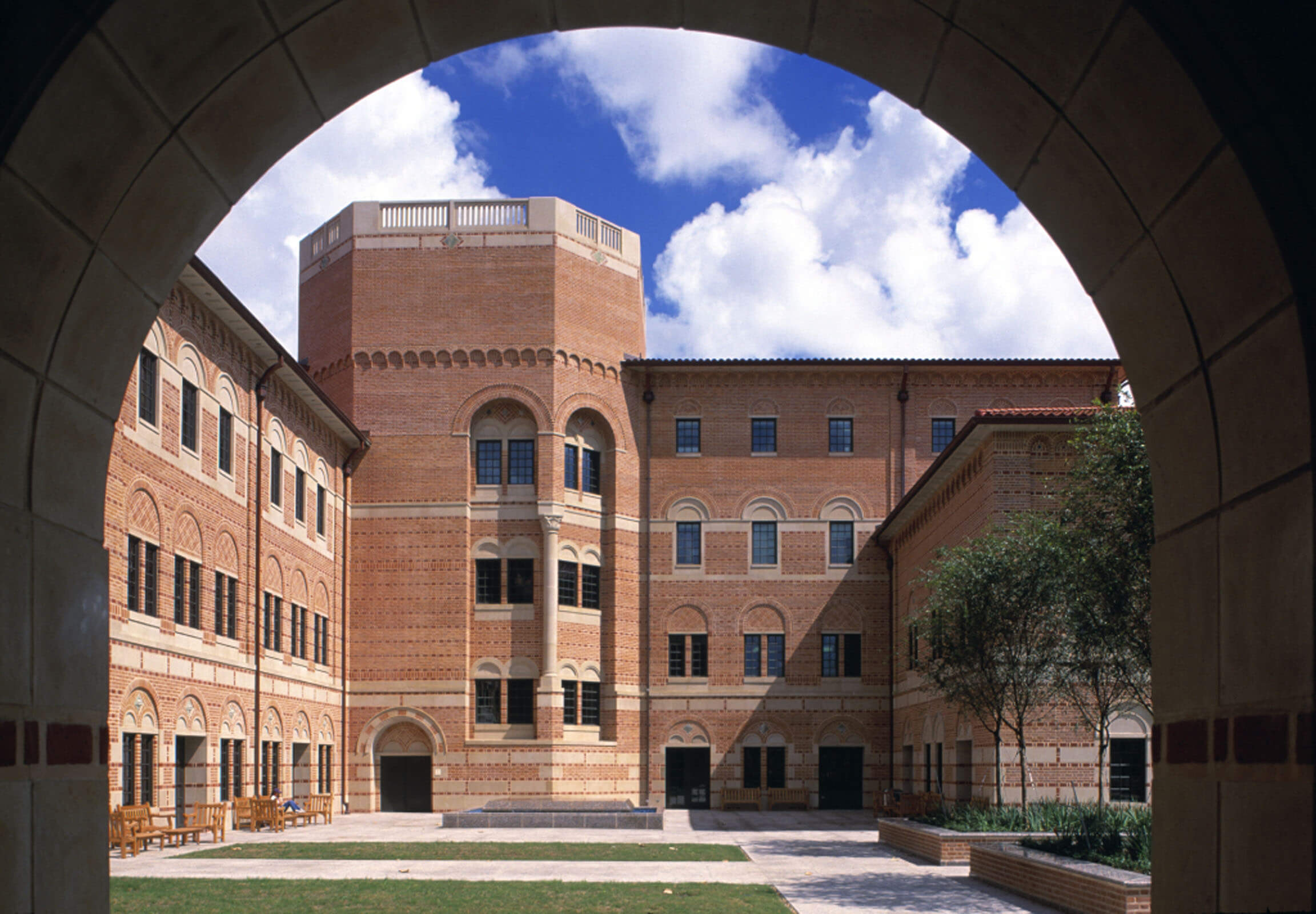